[books] Along the Silk Roads in Mongol Eurasia

During the thirteenth and fourteenth centuries, Chinggis Khan and his heirs established the largest contiguous empire in the history of the world, extending from Korea to Hungary and from Iraq, Tibet, and Burma to Siberia. Ruling over roughly two thirds of the Old World, the Mongol Empire enabled people, ideas, and objects to traverse immense geographical and cultural boundaries. Along the Silk Roads in Mongol Eurasia reveals the individual stories of three key groups of people—military commanders, merchants, and intellectuals—from across Eurasia. These annotated biographies bring to the fore a compelling picture of the Mongol Empire from a wide range of historical sources in multiple languages, providing important insights into a period unique for its rapid and far-reaching transformations.

Read together or separately, they offer the perfect starting point for any discussion of the Mongol Empire’s impact on China, the Muslim world, and the West and illustrate the scale, diversity, and creativity of the cross-cultural exchange along the continental and maritime Silk Roads.

Mongolia — Rural And Town Scene On Edge Of Gobi Desert (1938)

END_OF_DOCUMENT_TOKEN_TO_BE_REPLACED

Points of Transition: Ovoo and the Ritual Remaking of Religious, Ecological, and Historical Politics in Inner Asia

«The bronze crosses – so called because of their overall cruciform shapes – measure between 3 cm and 8 cm in height and are symmetrical, featuring an outline in high relief and a loop on the back. Their flatness and loop suggest that they could have been pinned on the body as decorative ornaments or personal seals – the latter function further supported by the survival of red-coloured ink deposits in some of the designs, showing that the seals were used as chops to print unique designs on other surfaces, perhaps letters. Scholars also believe that the crosses could have been used as clan identification objects in Mongolian tribes, or symbols that differentiated between male and female clan members. Other theories suggest that the crosses could have been used superstitiously as magical chops to seal properties when owners were away.

… The crosses displayed in different categories also show different motifs and geometric patterns. One highly recognisable recurring motif is the swastika, a Buddhist symbol since the 1st century, which is often represented in the centre, forming hybrid symbols with the straight or rounded parts of the cross shapes. This use of the swastika in combination with the Christian motif of the cross was specific to the Nestorians in China. In other examples, bands that formally represent radiating beams connect the four arms of the cross, seemingly referencing the literary meaning of Jing Jiao in Chinese as ‘luminous religion’. Floral patterns, popular as motifs in Persian culture, are found in other crosses, while Chinese seal-like forms, including the popular form of the Chinese character gong (Text Box: ), recur on other designs, further showing the mix of cultural symbols incorporated into the designs of the artefacts. The animal-shaped motifs on some of the crosses stand out even more distinctly than the recognisable geometric patterns. Most of these motifs recall the shapes of birds – some single ones, others with two heads or pairs of intertwined wings and bodies. These birds are either spreading their wings, reinforcing the strict symmetry of the cruciform shapes, or showing no wings or feathers, confined in the centre of the crosses. While it might be tempting for viewers to think of the birds as white doves, symbolising the Holy Spirit in Christianity, there is no evidence that this iconography existed in Eastern Christianity and Nestorianism in China. Rather, the single bird motif could have been meant as an eagle, a religious symbol for Mongolians who worshipped the sky. The two-headed birds could also have been Buddhist symbols of fire and light, while the double birds with turning heads conform to a popular motif in Persian art at that time». 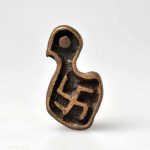