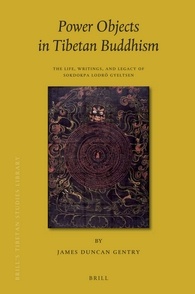 «In Power Objects in Tibetan Buddhism: The Life, Writings, and Legacy of Sokdokpa Lodrö Gyeltsen, James Duncan Gentry explores how objects of power figure in Tibetan religion, society, and polity through a study of the life of the Tibetan Buddhist ritual specialist Sokdokpa Lodrö Gyeltsen (1552–1624) within the broader context of sixteenth- and seventeenth-century Tibet. In presenting Sokdokpa’s career and legacy, Gentry traces the theme of power objects across a wide spectrum of genres to show how Tibetan Buddhists themselves have theorized about objects of power and implemented them in practice. This study therefore provides a lens into how power objects serve as points of convergence for elite doctrinal discourses, socio-political dynamics, and popular religious practices in Tibetan Buddhist societies.» 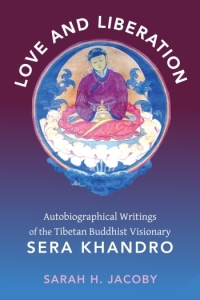 «Love and Liberation reads the autobiographical and biographical writings of one of the few Tibetan Buddhist women to record the story of her life. Sera Khandro Künzang Dekyong Chönyi Wangmo (also called Dewé Dorjé, 1892–1940) was extraordinary not only for achieving religious mastery as a Tibetan Buddhist visionary and guru to many lamas, monastics, and laity in the Golok region of eastern Tibet, but also for her candor. This book listens to Sera Khandro’s conversations with land deities, dakinis, bodhisattvas, lamas, and fellow religious community members whose voices interweave with her own to narrate what is a story of both love between Sera Khandro and her guru, Drimé Özer, and spiritual liberation.»

The Complete Nyingma Tradition from Sutra to Tantra, Books 1 to 10. Foundations of the Buddhist Path by Choying Tobden Dorje, translated by Ngawang Zangpo.

In 1838, Choying Tobden Dorje, a Buddhist yogi-scholar of eastern Tibet, completed a multivolume masterwork that traces the entire path of the Nyingma tradition of Tibetan Buddhism from beginning to end. Written by a lay practitioner for laypeople, it was intended to be accessible, informative, inspirational, and above all, practical. Its twenty-five books, or topical divisions, offer a comprehensive and detailed view of the Buddhist path according to the early translation school of Tibetan Buddhism, spanning the vast range of Buddhist teachings from the initial steps to the highest esoteric teachings of great perfection. Choying Tobden Dorje’s magnum opus appears in English here for the first time.

In Foundations of the Buddhist Path, which covers the first ten of the treatise’s twenty-five books, the author surveys the scope of the entire work and then begins with the topics that set the cornerstones for all subsequent Buddhist practice: what constitutes proper spiritual apprenticeship, how to receive the teachings, how to make the best use of this life, and how to motivate ourselves to generate effort on the spiritual path. He then describes refuge and the vows that define the path of individual liberation before turning to the bodhisattva’s way—buddha nature, how to uplift the mind to supreme awakening, the bodhisattva’s training, and the attainments of the paths leading to supreme awakening.